Sound Strategy Starts
With Having
The Right Goal

Schedule your Appointment with Us Today!

Banks rent our money, (pay interest on our deposits). Use our money as capital for their product, (loan our money to the next guy in line). Collect the arbitrage (spread) which is HUGE! Can I possibly transfer any of those banking functions to my personal financial environment?

This is actually called Fractional Reserve Banking and very well may be the biggest “shell game” every perpetrated on the American people. It is operated by the Federal Reserve, which isn’t federal and there are no reserves! It was deliberately named to confuse and get Americans believe that it operates in the people’s best interest. Truth is, the Federal Reserve is a private bank owned by private stock holders and ran purely for their private profit – with the blessing of Congress since 1913.

It has total control of the money supply! Your financial future has been in somebody else’s hands since 1913! Truthfully, not set up for you to win.

The Federal Reserve Is the number one creditor of the U.S. Government! That puts an entirely new light on Proverbs, “The borrower will be slave to the lender.”

Let’s look at an actual example of how banks win and why we need to find a way to “Be A Bank.” We deposit our money into the bank for 1% interest on our money. This amount is actually pretty high in today’s current environment. Now the bank loans this money out to the next guy in line for a car at 5%. That’s a 500% increase and a 400% profit margin! Did you earn a 400% rate of return last year? Yeah, me neither.

Yet people do this every day. In 1980, same principle but the numbers were different!

You see, when you deposit money into a bank, credit union, or savings & loans, you lose control and the bank gets the title on that money and that money becomes an asset of the bank and you become a creditor.

By the end of the 1980’s, there wasn’t enough money in FDIC to cover the banks. Not hard to see when you realize banks can loan every dollar you place with them 10-12 times. Get this, banks are literally making money out of thin air – legally!

So…when Alan Greenspan, head of the Federal Reserve, drastically cut interest rates being paid on deposits, “to protect our economy and banks from failing. The 9% became 3% and continued lower from there, including today. This reduction devastated retirees trying to live off of interest income from CD’s. It was a huge income hit on the people, yet banks were making record profits.

Ex) 3% to depositor, charging 9% for loans = a 6% spread but a 200% rate of return! Please understand, banks make even more money in times of low interest rates, like they have been the last 30+ years!

Yet in 2008, banks have been run so poorly that they needed to be “bailed out”, after 25+ years of 200% returns! Enter TARP, the Troubled Asset Relief Program, a $700 Billon fix proposed by Congress and approved by the President.

So, the Federal Reserve loaned money to failing banks at ½% and the banks invested that into government backed guaranteed securities at 4%. Meanwhile, Americans lost their jobs, homes, and life savings while the politicians gave banks a guaranteed 700% return on no risk treasuries. Please do not ever believe that our government is here for you, especially when it comes to money.

That was an exceptionally difficult time for many people, who still suffer today from the selfishness of a President, Congress, and banks. So, what can we learn from this debacle, we must understand this idea of leverage and how it works?

To Be A Bank, we need a charter, and those are extremely hard to get or qualify for. No chance. It also takes 100’s of millions of dollars. Don’t have that either. Takes a very long time to be approved, maybe decades. Nope, can’t do that either. What if our bank wasn’t the brick and mortar ones, we commonly see on every prominent street corner? What if we could use a strategy to grow our own wealth safely, and predictably, and has been used for over 200 years! We don’t need a charter, millions of dollars, and decades to make it happen!

If you want to win like a bank (700% returns) then do what banks do with their money (tier one assets, that are too valuable to lose) not what they tell you to do with your money (give it to them for 1% return).

You see, you truly can control the environment where your wealth resides, and if you don’t, the banks will. 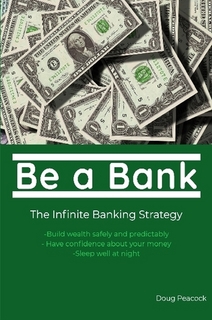 Your Wealth Must Reside Somewhere!

Your wealth must reside somewhere! It must have a permanent place of residence. You must own, control, and have use your money, or you haven’t built any wealth, you just stashed some money away. About 90 % of Americans keep their wealth in either taxable, unavailable, and/or volatile residences that limit what you can do with their money. If what you thought was true about your money, wasn’t true about your money, when would you want to know? I first heard this question from Don Blanton, a fine southern gentleman with a distinct southern Georgia drawl, and I’ve been unable to “unhear” it, since.